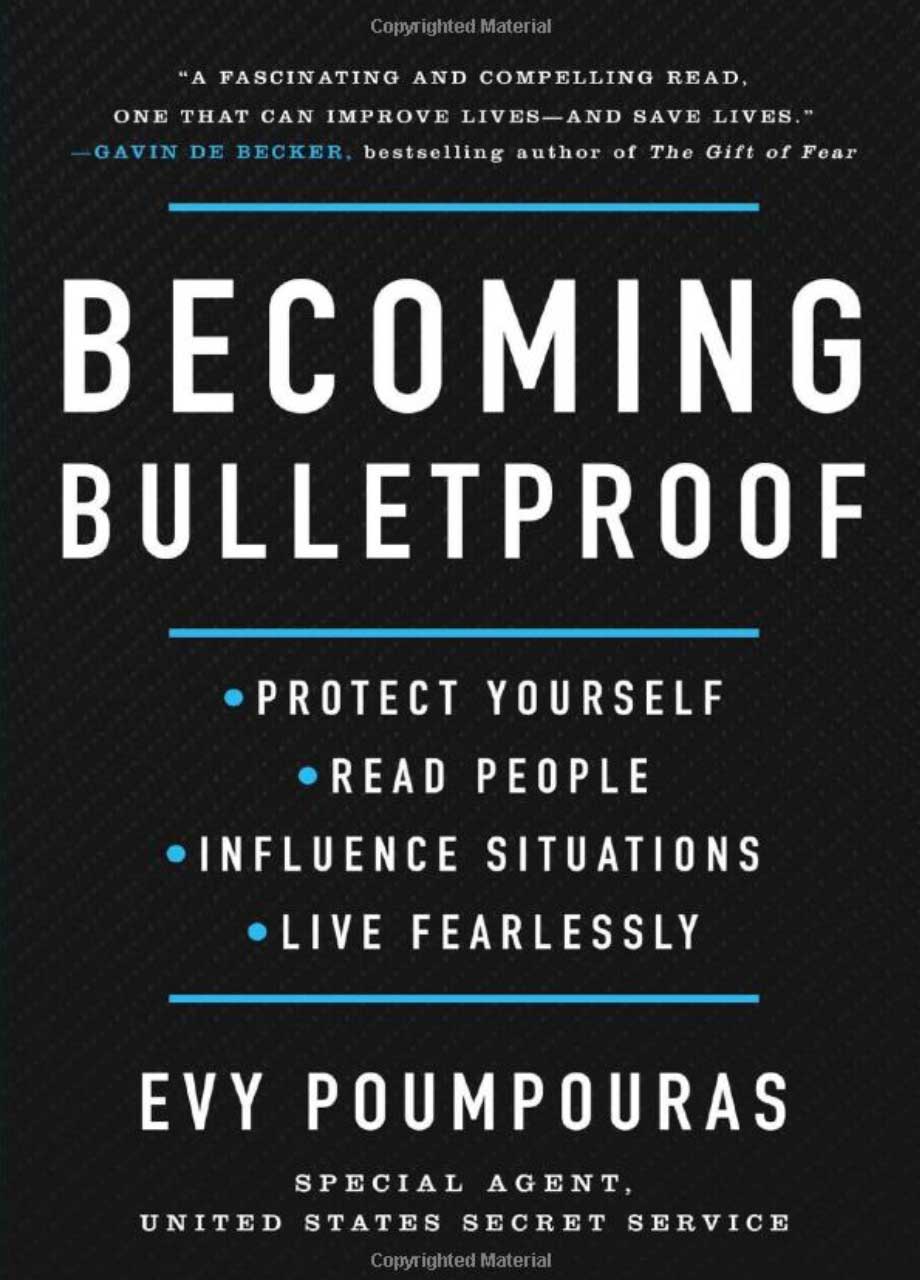 
Former Secret Service agent and Bravo Spy Games star Evy Poumpouras shares lessons learned from protecting presidents, as well as insights and skills from the world`s oldest and most elite security force to help you prepare for stressful situations, instantly read people, influence how you are perceived and live a more fearless life.


Becoming bulletproof means becoming a stronger, more confident and more powerful person. Evy Poumpouras - former Secret Service agent to three presidents and one of five women to receive the Medal of Valor - demonstrates how we can overcome our everyday fears, have difficult conversations, know who to trust and who may not have our best interests at heart. , influence situations and prepare for the unexpected. When you become bulletproof, you are your best, bravest and most powerful version of yourself. Poumpouras shows us that, ultimately, true strength is found in the mind, not the body.

Evie Pumpuras is a former Secret Service special agent and national television correspondent who appears frequently on NBC, MSNBC, CNN, and HLN. She also co-stars on the reality spy show Bravo's Spy Games. Evy holds a master's degree in forensic psychology from Argosy University and a second master's degree from Columbia University's Graduate School of Journalism. She was also awarded the US Secret Service Medal of Valor for her heroism on 9/11 and was part of the defense of former Presidents Barack Obama, George W. Bush, William J. Clinton, George W. Bush. Bush and Gerald Ford. She is also an adjunct professor at the City University of New York, where she teaches criminal justice and criminology.

Courage includes facing our fears, but also resilience, courage, having a built-in bullshit detector and knowing how to use it. In Becoming Bulletproof, Pumpuras demonstrates how to empower our natural instincts to harness all of these qualities and move from fear to fearlessness.

“Evy offers us a new narrative about what strength, determination and fortitude sound like, how to act and look. Her book shows us where our true strength and fearlessness come from: the mind. the cultural climate introduces us in a new way to strengthen and protect ourselves” - Iman Oubou, founder and CEO of Swaay Media.

“Evy takes readers on a powerful journey from being vulnerable and afraid to be prepared. Not only would I entrust my life to her, but I would walk with her through every door” - John (Buck) Smith, Chief Inspector / Leader, Refugee Group, US Marshals Service (Retired).

"In a world that every year seems to be more and more brutal, less safe and insane, Evy is a much needed voice of calm, humor and common sense." - Jenny Hutt, Sirius XM Radio Presenter.

“Poumpouras' wise direction and actionable lessons will be relevant to audiences of all ages. Those looking for a confidence shot will love it.” - Publishers Weekly, Starred Review.

"Evy brings her expert and persuasive voice to one of the most important issues we face personally and globally: security." - Gavin de Becker, bestselling author of The Gift of Fear.

“Evy's insight into safety and self-defense is second to none. In addition to her incredible knowledge, training and experience, she has been battle tested and proven that she was able to support our country when there were so many lives at stake, including her own. For anyone concerned about personal safety in these difficult times, this book is a must read. ” - Maria Menounos, New York Times bestselling author.

"San Bernardino, Paris, Las Vegas ... for years I have turned to Evy to advise, guide and empower in times of crisis. When it comes to safety, I find myself wondering, 'What would Evy do?' "- Dr. Drew Pinsky.

Becoming Bulletproof is about becoming a better version of yourself. Former Secret Service Agent Evelyn Poumpouras demonstrates how we can overcome our daily fears, have difficult conversations and know who to trust and what they may be trying to do to us. She also teaches us how to influence situations and prepare for the unexpected so that we can be our best selves.

Evy Poumbouras is a former Special Agent in the US Secret Service and on-air national television contributor who frequently appears on ABC, CBS, FOX, and NBC. She also stars on Bravo’s spy games, an espionage-inspired Reality Competition. Evy holds a Master’s Degree in Forensic Psychology from Argosy University. She is also the recipient the United States Secret Service medal of valor for her heroism on September 11th 2001 and has been part of protective details for former presidents Barack Obama, George W Bush, Bill Clinton, George HW Bush, and Gerald Ford.

The author has a lot of experience (and a little bit of a flair for self promotion) and he knows how to write a good book. He also has a wealth of knowledge about safety issues and he's written a very useful book. I've worked in corrections and in the emergency room so I'm pretty familiar with safety issues but she added a couple of things I didn't consider. A good read. Worth the money!

On the day of release I bought the Kindle version, so I didn't need to wait for the mailman. When I read through the prologue, I returned to Amazon to purchase a hardcopy, but it was sold-out. Boom! I have no choice but to say it's sold-out for a reason! Ms. Poumpouras' book is very well researched, extremely informative and packed with exciting stories from behind the scene. I wish it had a little more stories at some points, though. I underlined a lot of paragraphs and learned even more. Must read!!

Not your normal feel-good you can do it motivational guide. Realistically lays out what you'll need to accomplish in order to protect yourself and others despite the obstacles you'll face. A good guide on how to develop grit as you achieve your goals. Well done.

Becoming Bulletproof PDF or a ebook is a good variant for a student. Personally I bought hardcover, but a friend of mine also purchased a kindle version (and was pretty happy with it). Evy Poumpouras is a great writer!

Without doubt Becoming Bulletproof is essentian for any businessman. Thank you Evy Poumpouras!