Stagnation of the economy is a period of low (or zero) GDP growth rates, high unemployment, lower wages and living standards. During the period of stagnation, the structure of the economy remains unchanged, there are no significant changes associated with scientific and technological progress, the economy does not accept innovations. If stagnation is accompanied by a high level of inflation (which is not mandatory), it is called stagflation. 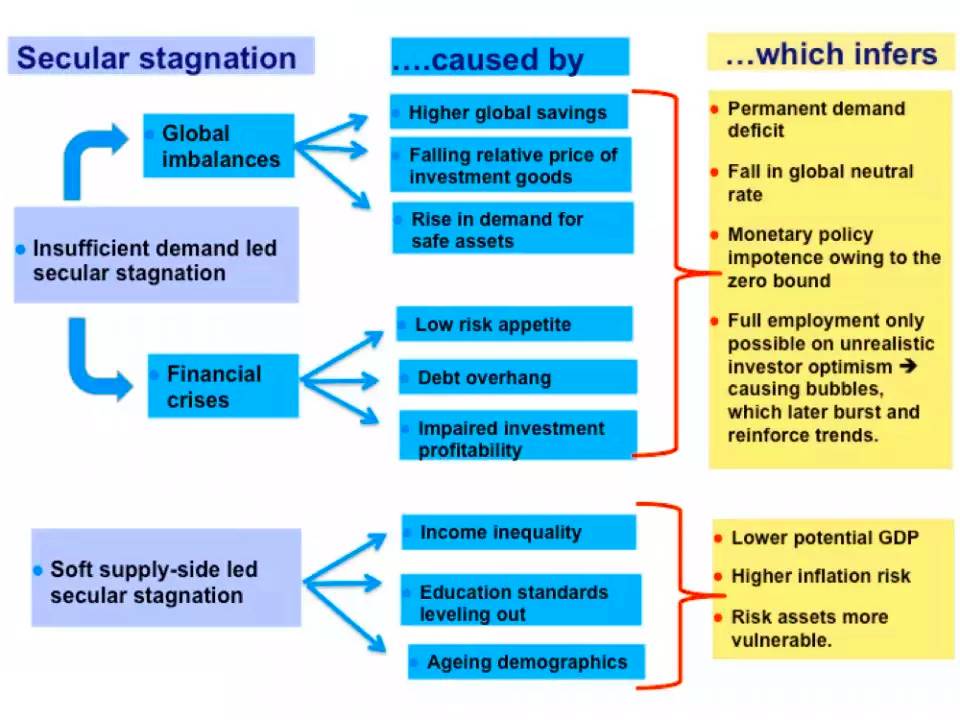 Stagnation is a long period of little or no economic growth. Real economic growth of less than 2% per year is considered stagnation, and is accentuated by periods of high unemployment and forced underemployment. Stagnation can occur on a macroeconomic scale or on a smaller scale in specific industries or companies. Stagnation can occur as a temporary condition, such as a growth slump or temporary economic shock, or as part of a long-term structural state of the economy.

Certain events or economic shocks can also cause periods of stagnation. They can be very short-term or long-term, depending on specific events and the strength of the economy. War and famine, for example, can be external factors causing stagnation. A sudden rise in oil prices or a drop in demand for a key export commodity could also trigger a period of stagnation in the economy. However, some real business cycle economists view such periods as essentially cyclical stagnation.

The causes of stagnation are not limited to two or three exact indicators that can be checked in the business news every day. It is also impossible to accurately identify the approaching stagnation by government decisions. Unfortunately, stagnation is one of the phenomena that are only apparent when they are already happening. This is in stark contrast to the recession phase in Western countries: recessions often go unnoticed because financial reports are released quarterly and often at the moment when the transition to a new phase of the economic cycle has already occurred.

There are no exact numerical values ​​characterizing periods of economic growth and stagnation, but traditionally, low economic growth rates, signaling the onset of stagnation, are understood as GDP growth of less than 2–3% per year for several years. It is important to distinguish stagnation from an economic crisis - a sharp shock reduction in GDP. Stagnation is exactly the absence of growth or almost imperceptible growth, but not a strong fall. 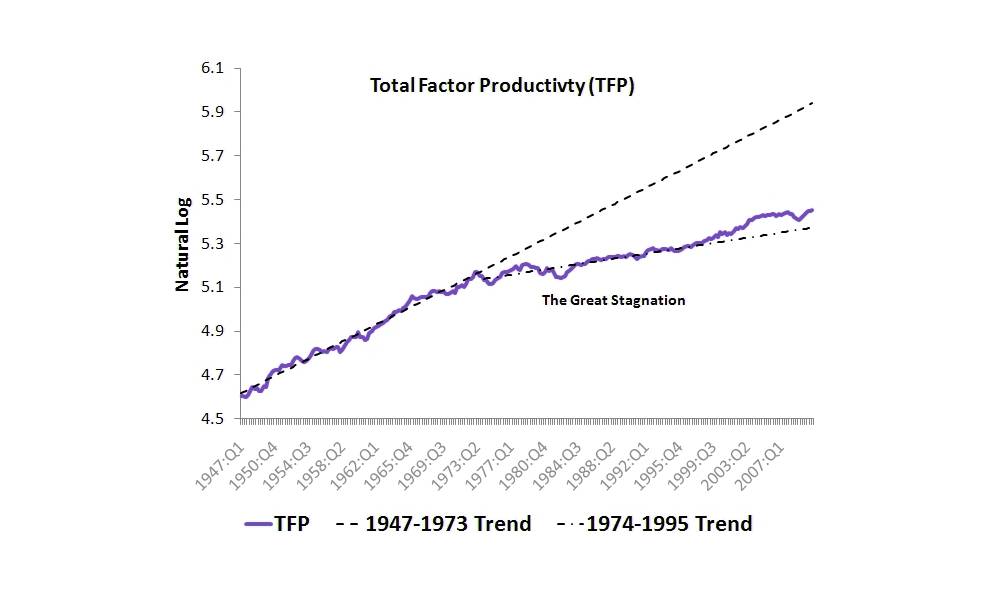 The first economic theory of stagnation was developed in the late 1930s by the American Keynesian economist Alvin Hansen, who introduced the term secular stagnation to describe the situation in the United States. He believed that at that time the US economy had exhausted growth factors and would not be able to break out of stagnation on its own in the foreseeable future. In his opinion, in order to resume growth, it was necessary to increase government spending, allowing a permanently high level of state budget deficit. Hansen's assumptions were not confirmed: the US economy began to grow already in 1940, and his ideas were forgotten.

In 2011, the American economist Tyler Cowen published The Great Stagnation, in which he argued that there has been a significant slowdown in the growth rates of various indicators (median household income, productivity) in the United States since the 1970s. In his opinion, the country has exhausted cheap and easily accessible resources for growth: new lands, an influx of immigrants, significant technological advances. As a result, despite outward relative prosperity and development, the life of the average family in the United States now does not fundamentally differ from life in the 1970s, and in some respects even from life in the 1950s. Cowen proposes to get out of the stagnation actively invest in science. Somewhat provocative statements and ideas expressed in the book have found a mass of supporters, and the term "Great Stagnation" is used to describe the situation in the developed world as a whole.

A stagnant economy can also result from longer-term structural conditions in a society. When stagnation occurs in a stable economy, it can be much more permanent than when it results from economic shocks or over the course of a normal business cycle.

Stagnation can occur in an advanced economy with economic maturity. Mature economies are characterized by slower population growth, stable economic institutions, and slower growth rates. Classical economists refer to this type of stagnation as steady state, and Keynesian economists view it as secular stagnation of an advanced economy. Institutional factors such as the entrenched power of established interest groups opposed to competition and openness can lead to economic stagnation. For example, in the 1970s and 1980s, Western Europe experienced this type of economic stagnation known as Eurosclerosis. 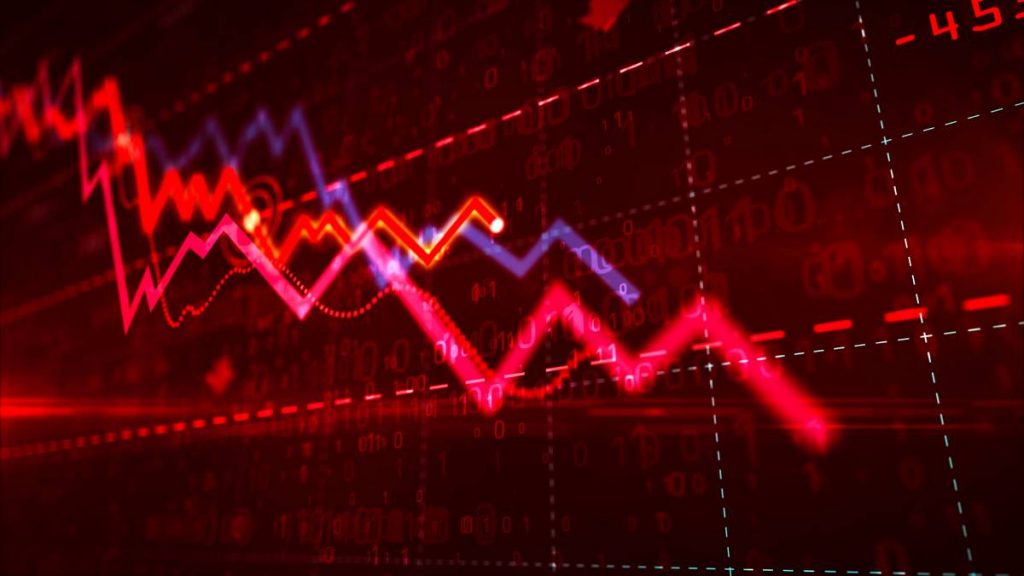 Often the concept of stagnation is confused with another related term - recession. You know that the economy develops cyclically. Despite the fact that these concepts are related to the economic cycle of development, these words mean slightly different things. Stagnation in the economic cycle is the moment when the economy reaches its peak, stabilizes and begins to decline. At the moment of stagnation, the country's economy, as it were, "hangs in the air" and after that it falls. That is, as a rule, after the stagnation of the economy, its degradation occurs, which subsequently leads to a recession and an economic crisis.

The emergence of stagnation or, in simple words, stagnation in the economy does not happen just like that. There are a number of prerequisites and reasons for this:

Excessive monopoly of the economyThe transition of the economy from one system to another (from market to planned) or a radical change in the views of the leadership (from conservative to liberal, and vice versa)Mistakes of the authorities and the leadership of the country, lack of attention to the economic situation in the country, especially the income of the population, the growth rate of production and trade.Low level of skills and qualifications of top managersLack of tools for regulating and stimulating the economy in the economic systemHigh level of corruption (bribery)General instability in world markets or in the economies of the country's main trading partnersExcessive protectionism, that is, the restriction of economic ties with other countriesStrong bureaucracy in business, trade, manufacturing and construction sectorsLack of funding for science and the study of new technologiesIrremovability of power and leadership of the country.

Signs of the beginning of stagnation

Low economic growth rates. GDP growth is about 0-1% for a long time. Low growth in production and tradeRising unemployment in the labor market. Bankruptcy of small and medium businessesDecline in the standard of living of the population and an increase in inflation. Occurs gradually, often unnoticed by the population for a long time before the onset of the crisis.Reducing both foreign and domestic investments in the country's economy and technology.

Ways to combat stagnation in the economy

Identifying signs of stagnation and understanding its consequences will not in itself save the country's economy. Fighting requires decisive action. Therefore, the country's leadership and top managers of large companies need to take urgent measures to combat stagnation and increase economic growth. All methods of combating the stagnation of the economy can be divided into two groups - theoretical measures and practical ones.

Theoretical measures include the fight against corruption at all levels of government, the reduction of bureaucracy, the restoration of trade and economic ties with the outside world. This also includes increased investment in science, advanced technologies, etc.

The practical method includes the “de-monopolization” of economic sectors, the development of competition in monopolized sectors, the reduction of tariffs for products and services of monopolies, and the increase in demand for the main types of products and services. Encouragement and stimulation of entrepreneurial activity, tax cuts. Raising the standard of living of the population and their income to stimulate purchasing power. Attracting investments from abroad. Also, one of the methods of struggle can be an increase in government spending.