Forbes discovered that several yachts owned by sanctioned Russian or Russian-origin billionaires have been converted to houseboats and have re-flagged. That is, they have changed their registration from British tax havens to more Russian-friendly locations.

It has been seven months since the Russian invasion of Ukraine prompted Western authorities to hit Russian oligarchs with sanctions and target their megayachts. The measures have ranged from seizure to cancellation of registrations and have made it difficult, if not impossible, for these floating palaces to obtain insurance and sail legally.

Several sanctioned Russian and Russian-born billionaires, however, are now registering their yachts in countries that have not imposed sanctions on Moscow. Perhaps because they could no longer obtain insurance in the territories where they were registered, or in an attempt to be able to sail legally if sanctions are ever lifted. Forbes has uncovered six yachts owned by sanctioned Russian billionaires that have recently changed their country of registration, or 're-flagged'. One of these, steel magnate Alexey Mordashov's North, a $521 million, 142-metre vessel, has switched from the Cayman Islands to Russia. Three other vessels have changed flags from the Caymans to Malaysia and Sierra Leone, one from Bermuda to Palau, and another from the Isle of Man to Sierra Leone.

The six yachts have a combined value of $1.8 billion, according to estimates by VesselsValue, an expert yacht valuation company, and the Italian government. Representatives of five of the six owners of these yachts did not respond to requests for comment. Andrey Melnichenko's public relations manager, Alexander Byrikhin, told Forbes that the Sy A is 'owned by a discretionary trust managed by an independent trustee and Mr Melnichenko has no [relationship] with that trust'.

The most famous vessel set to change flags is Scheherazade, technically owned by oil and gas billionaire Eduard Khudainatov, but believed to be held on behalf of President Vladimir Putin. Scheherazade, one of the world's largest yachts, also equipped with a helicopter pad, was blocked by Italian authorities in May.

In addition to changing registration, four of the six yachts that changed flags - Galactica Super Nova, Le Grand Bleu, Scheherazade and Sy A - were registered as houseboats instead of yachts or pleasure boats. 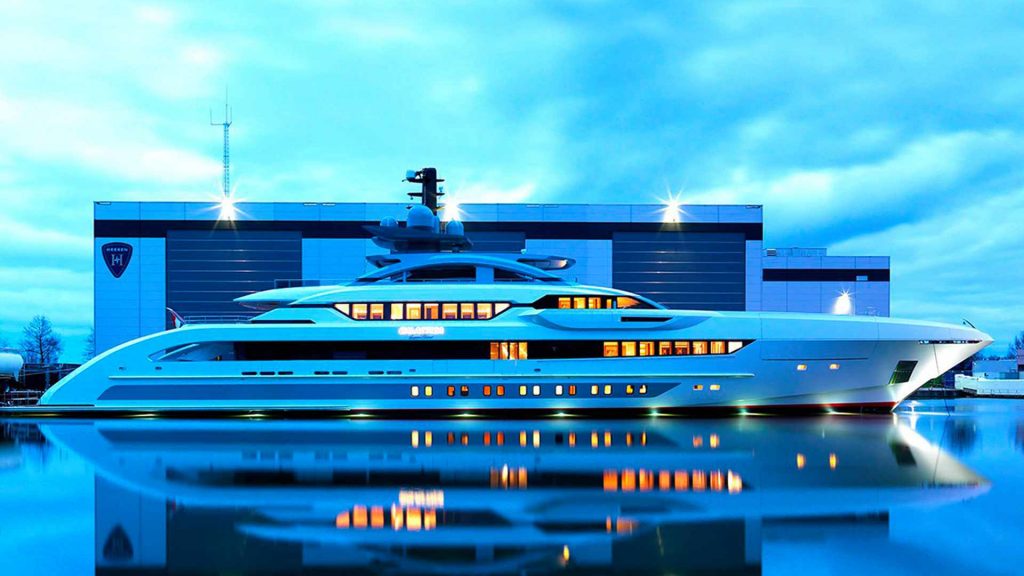 "It is unclear why some of these yachts have been registered as houseboats," says Benjamin Maltby, a partner at London-based superyacht law firm Keystone Law. "Unless they have been completely dismantled and are physically unable to move, in which case there would be no point in registering them anywhere anyway."

Re-flagging does not mean that the vessels will travel to those distant countries. For example, two of the six yachts - Scheherazade and Sy A - have been blocked in Italian ports for months after being detained under EU sanctions against their owners. Leonid Mikhelson's Pacific is in Turkey, a welcome destination for Russian megayachts thanks to the absence of sanctions against Russia, while Eugene Shvidler's Le Grand Bleu was last spotted in Puerto Rico on 20 September. Vagit Alekperov's Galactica Super Novat switched off its transponder off the coast of Montenegro in early March and its current position is unknown. Mordashov's North, which went under the Russian flag, took refuge in the Russian port of Vladivostok in March and is now bound for Hong Kong.

Vessels often flagged or registered offshore to obtain tax benefits and other advantages, such as confidentiality of ownership. The six re-flagged yachts were previously registered in Bermuda, the Cayman Islands, and the Isle of Man, all of which are popular jurisdictions for their political stability, lack of taxation, and affiliation with the Red Ensign Group, which provides the vessels with the protection of the British Royal Navy.

These locations, as British overseas territories and crown dependencies, joined the sanctions imposed by the UK: the Isle of Man cancelled the registration of the My A and Andrey Melnichenko's Sy A in March, while the latter was blocked in Italy in the same month. The Sy A has gone under the flag of Sierra Leone, while it is unclear where the My A is currently registered. The $230 million, 119-metre vessel switched off its transponder in March to avoid being tracked and was last spotted in June in Ras Al Khaimah, United Arab Emirates.

The reflagging of a stranded yacht, such as the Sy A, raises the question of why the owner has to go to this trouble when he cannot access or move the yacht. One possibility is that these yachts may one day sail legally again under a new flag, should the sanctions be lifted and the ships released. In September, Melnichenko took legal action before the European Court of Justice to annul the sanctions imposed against him.

'It seems that the owners only re-registered when the registration was cancelled, or when cancellation seemed imminent,' says Maltby.

Another theory is that the Western sanctions made it difficult for yachts to maintain the necessary insurance for registration in more favourable jurisdictions. According to a source close to the matter, Russian oligarchs affected by sanctions found it difficult to repay loans from Western lenders, often in cases where the yachts served as collateral. This implies the need to transfer the debt to Russian banks and obtain new insurance for the yachts, as Western insurance companies are not interested in staying in business with sanctioned Russians. This, in turn, implies for the yachts the need to find a new flag, because the preferred jurisdictions, such as Bermuda and Cayman, will not accept their new insurance credit and their previous debts. 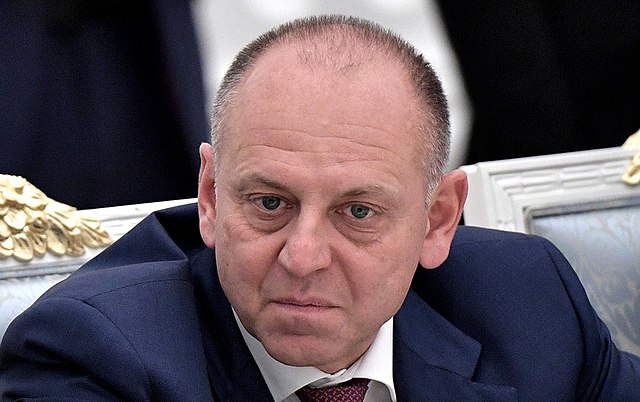 Such is the case of steel pipe tycoon Dmitry Pumpyansky. His 72-metre yacht Axioma, registered in Malta, was seized in Gibraltar in March after JPMorgan alleged that Pumpyansky had breached the terms of a $20 million loan. JPMorgan alleged that Pumpyansky had defaulted on a loan to a company he owned, which had used the yacht as collateral. The Axioma was sold at auction in August for $37.5 million. VesselsValue had valued it at 42 million. A representative of Pumpyansky did not immediately respond to a request for a statement.

Where oligarchs register their yachts

It is strange, however, to note that these megayachts are registered in Palau and Sierra Leone. Malaysia, unlike the other two countries, boasts a duty-free international yacht registry on its island of Langkawi, a popular location for yacht owners in Asia. "Langkawi is internationally recognised and has become very popular in recent years," says Cheryl Pereira, office and yacht registry manager at Hong Kong-based sales and brokerage firm Simpson Marine.

According to the vessel tracking service VesselFinder, 13 megayachts, or boats of 24 metres or more in length, are registered in Malaysia. Forbes identified the owners of three: Malaysian rubber baron Vinod Sekhar's Petra Tara and two yachts owned by non-sanctioned Russians, billionaire oligarch Anatoly Lomakin's Sea & Us, worth $59 million and 62 metres long, and former Russian Deputy Prime Minister Vitaly Mutko's Vector, worth $32 million and 27 metres long. Lomakin's Sea & Us changed its flag from the Marshall Islands to Malaysia after June, possibly to avoid possible future sanctions. A representative of Lomakin did not respond to a request for comment.

The records of Palau and Sierra Leone are far less reliable than that of Malaysia. Both countries are on the 'grey list' of the Paris Memorandum of Understanding (MoU), an initiative between 25 European countries and Canada to coordinate port security inspections and prioritise the detention of unsafe ships. Sierra Leone is also on the 'blacklist' of the Tokyo MoU, a similar understanding between 21 countries bordering the Pacific Ocean, including Russia. Palau is on the Tokyo MoU's grey list.

A spokesperson for the Sierra Leone Maritime Administration, which manages the country's ship registry, told Forbes that the country has seen "an increase in incoming requests" from Russian ship owners, but that "most of the requests will not materialise for various reasons". The spokesman did not respond to Forbes' questions about why such requests are not proceeding.

"The yachts have to fly the flag of some country, otherwise it is almost certain that they will be detained at their next port of call," says Maltby. "Without a registry, there is no one to issue the internationally required safety certificates. This seems to be the case for any port during a storm."

But opting for a registry like Palau or Sierra Leone comes with a number of disadvantages. In addition to the increased risk of inspections and detentions, registering a yacht in a grey or black registry could compromise the vessel's resale value. Moreover, this type of registration makes it more difficult to obtain insurance - which is necessary to sail the yacht - because companies are less inclined to insure a yacht registered in a risky jurisdiction.

"Historically, large yachts have rarely been inspected because their owners can afford to flag countries with the most reliable registries," says Maltby. "Although mostly a school case for sanctioned individuals whose ability to conduct international banking transactions has been restricted, an anomalous choice of registry can give the impression of a shipowner whose approach to security is more superficial than might be expected."

Since March, the EU, the UK and the US have frozen, seized or blocked at least 15 yachts owned by 13 sanctioned Russian billionaires with a total value of $3.3 billion. Besides Axioma, only two other yachts owned by sanctioned Russian billionaires have changed ownership: Suleiman Kerimov's Amadea and Viktor Vekselberg's Tango, both seized by the US.

"In the UK and throughout continental Europe, there is nothing to prevent the owner from changing flags at any time, provided registration fees are paid and the necessary investigations are carried out," says Maltby. 'The authorities have taken possession, not ownership. This is in stark contrast to the situation in the US.