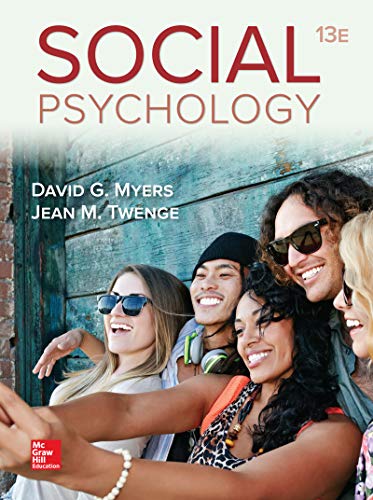 
This tutorial is very informative and written to be understood. The explanations and examples are applicable to modern times and almost anyone can take a look at how we communicate with the world. Highly recommended.

David Myers is the John Dirk Werkman Professor of Psychology at Hope College where he has taught for the past 30 years.  David Myers' love of teaching psychology has been rewarded by students on many occasions with numerous “Outstanding Professor” awards.  An award-winning researcher, Dr. Myers received the Gordon Allport Prize from Division 9 of the American Psychological Association for his work on group polarization.  His scientific articles have appeared in more than two dozen journals, including Science, American Scientist, Psychological Bulletin, and Psychological Science.  He has served his discipline as consulting editor to the Journal of Experimental Social Psychology and the Journal of Personality and Social Psychology.

As a professor of psychology at San Diego State University, Jean Twenge is the author of more than 120 scientific publications on generational differences, cultural change, social rejection, gender roles, the self-esteem and narcissism. Her research has been covered in Time, Newsweek, The New York Times, USA Today, U.S. News and World Report, and The Washington Post, and she has been featured in Today, Good Morning America, CBS This Morning, Fox and Friends, NBC. Nightly News, Dateline NBC and National Public Radio.

She has summarized this research for a wider audience in the books Generation Me: Why Today's Young Americans Are More Confident, Assertive, Entitled- and More Miserable Than Ever Before and The Narcissism Epidemic: Living in the Age of Entitlement (co-authored with W. Keith Campbell). She has written for the general public on several websites and magazines, including an article for The Atlantic which was nominated for a National Magazine Award.

Connecting social psychology to the world around us, we introduce students to the science of ourselves: our thoughts, feelings and behaviors in a changing society. Students learn to critically examine everyday behaviors and gain an understanding of the world around them, no matter what their background or major. This edition features renowned author David Myers again joined by respected psychologist and generational differences expert Jean Twenge, who presents an integrated learning program designed specifically for today's students.

What is Social psychology?

Social psychology is the scientific study of human behaviour within groups. The major questions social psychologists ponder are these: Why do people behave the way they do? What influences our thoughts and behaviours? And what can we learn about ourselves and others through studying them?

What is an example of social psychology?

What is social psychology used for?

Social psychologists study how people interact socially. They investigate what influences an individual’s behavior and how they react to others. Their work involves studying how individuals perceive themselves and others, and how these perceptions affect our behavior.

What are the three main focus of social psychology?

Social Psychology aims to understand how people think about themselves, others, and the world around them. These three areas of interest are shown in figure 1.1. In our daily life, we interact with each of these areas simultaneously; however, they can also be studied independently. For example, one could study social thinking without studying social influence, or vice versa.

What is the difference between social psychology and sociology?

Put simply, social science is the study of human behavior and interactions within society, whereas sociological studies investigate the patterns of behavior among groups of people.

When did social psychology start?

The discipline of social psychological research began in the United States around the dawn of the 20th century. The first published studies in this area were experiments conducted by Norman Triplett (1908), who studied the phenomenon of social faciliation.

Social psychology studies human behavior and interaction and focuses on the interactions between individuals. It explores why people behave the way they do and what influences them to act in certain ways. It also looks into how people interact with each other and how these interactions can influence their lives.

"This was my first experience buying a used book online. I didn't know what to expect, but I'm happy to say that I received exactly what I wanted. Thanks again!"

"Came in great condition. This book is very informative and written to be understood by everyone. The explanations and examples applied to modern times and almost anybody can take a look at the way we socialize with the rest of the world. Highly recommended!"

"The description states that the access code won’t be included. Therefore, if you order the paperback version, you will have to buy the access code separately. Most university bookstores offer bundles, where they include both the book and the access code. You can get them for around $90. Don‘t waste your money!"

Got a PDF version of Social Psychology 13th Edition - now I want a hardcopy! David Myers you are the best. Simply.

The ideas explained in the Social Psychology 13th Edition PDF book are not uniqie. But still, David Myers is super skilled in making such kind of material easy consumable and conceivable.

Social Psychology 13th Edition PDF or a ebook is a good variant for a student. Personally I bought hardcover, but a friend of mine also purchased a kindle version (and was pretty happy with it). David Myers is a great writer!