Christine Lagarde tarred with all kinds of criticism in the aftermath of the 75-basis-point rate hike announced by the ECB, the strongest since the birth of the euro, amid a war in which several economists say recession is already a reality. 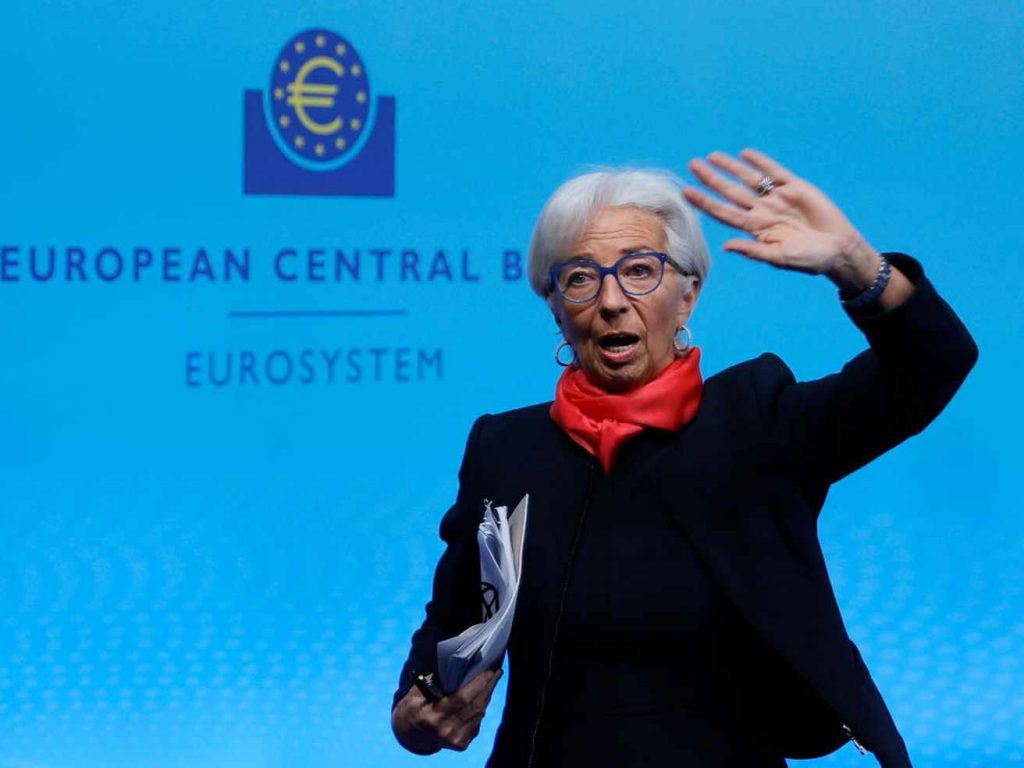 Italian politicians preparing for the general election next September 25 are the most dissatisfied.

Incidentally, an article in La Repubblica from a few days ago, thus before the maxi monetary tightening of 75 basis points, already highlighted the ECB's warning to Giorgia Meloni, referring to the euro anti-fragmentation shield, which in Italy is known as the anti-spread shield saving Btp, announced by Frankfurt last July 21.

"ECB warns Meloni: 'Anti-spread shield only with accounts in place'."

So La Repubblica wrote on the eve of the ECB Governing Council meeting:

"Like it or not, the fate of our public debt depends largely on the Central Bank. And on this point the message toward Giorgia Meloni has already gone out from Frankfurt. The Bank's anti-spread 'shield' will be activated only under certain conditions, that is, only if the eventual tension on government bonds has not been provoked by the new executive's improvident choices."

Practically, the newspaper article reads, "If the future government in Rome thinks it can rely on this instrument no matter what happens in the coming months, forget it. Indeed, European bankers will activate the defense of Italian government bonds if the executive 'behaves well,' if its policies are not 'spend and spend.'"

Elections and the ECB, is Lagarde already warning Giorgia Meloni?

What La Repubblica highlighted was confirmed on Bce-Day yesterday by statements that ECB number one Christine Lagarde made during the press conference following the rate announcement.

Asked about the BTP TPI (Transmission Protection Instrument) bailout shield, at a time when an Italian storm is feared for Italian bonds, with the Financial Times clearly writing that hedge funds are placing the most massive short bet since 2008 against BTPs and Italian paper, Lagarde appeared almost annoyed, merely responding with the following words:

"I don't have anything new to add today regarding the Tpi but we are ready to use it if needed."

Stop. Of the series, the ECB has already given. And especially to Italy, which had what was considered by markets and the international community of economists to be the perfect shield: Mario Draghi in government.

Not only that: while doing mea culpa on inflation, at the same time putting herself on the defensive, and while admitting the ECB's impotence in being able to curb the price flare-up - inflation, she explained, was not caused by demand as in the U.S. but by supply -, Lagarde nonetheless rose to the lectern, imparting a lesson to Eurozone governments:

"Fiscal support measures aimed at buffering the impact of higher energy prices should be temporary and targeted at the most vulnerable households and firms, in order to limit the risk of driving up inflationary pressures further, and to strengthen the efficiency of public spending, and to preserve debt sustainability."

ECB and the BTP bailout shield that is not there

Returning to the ICC, ergo the anti-spread shield, the BTP bailout instrument was announced at the previous ECB meeting, last July 21, on the very day of the resignation of Prime Minister Mario Draghi, in an Italy shaken by the government crisis.

The shield was christened precisely TPI (Transmission Protection Instrument). But its limitations (in being able to save Italy) became apparent immediately, on the same day.

Practically, with the disintegration of the Draghi government - considered in itself a guarantee against market speculation and the ultimate expression of the #WhateverItTakes needed by Italy, a country negligent on reforms for too many years - the ECB did not churn out an ad hoc shield for Italy, which, according to the Eurotower but not only, has shot itself in the foot. Nor has it churned out an ad hoc instrument for the indebted countries of southern Europe.

On the BTP bailout shield from Barclays they had also immediately pointed out that the fact that "the deterioration should not be due to country-specific fundamentals, in fact excludes Italian bonds, thus BTPs in general, from purchases, at a time when Italy faces, among other things, political uncertainty" that is bound to last.

The conditions decided upon for activating the instrument immediately appeared to be a high-water mark to populists not only in Italian politics but in all euro area member countries: first, it will be the ECB that will decide whether or not to activate the ICC. Second, as Lagarde said, "We are not hostage to anyone."

BTP thus orphaned of a real assist, in times of recession alert and #caroenergy and #caribbean bills, in the face of a hawkish ECB ready to raise rates further to blaze inflation.

In justifying the maxi rate hike of 75 basis points announced yesterday, Lagarde in fact made it clear that inflation is too high, then reiterated that "inflation is incredibly high" and that for this reason the ECB may decide to raise rates even beyond the terminal rates (i.e., one wonders in the markets, since the extent of these is unknown?).

"On the choice that the ECB made today I express perplexity," Meloni told Sky TG24:

Consequently, Meloni continued, "in this case, raising rates I fear that more than containing inflation may further compress an economy that is already struggling. It's a choice I wonder about, and I fear that it will not have the result that Christine Lagarde hopes for."

"The ECB's decision weakens the efforts member states are making to help families and businesses. The return to old recipes worries us greatly."

"While in Brussels some progress is being made, with enormous delay and only in part, on measures to contain and compensate for the soaring gas and electricity prices, in Frankfurt they are proceeding expeditiously on autopilot. We are in a war economy, inflation is imported, investment falls, the purchasing power of labor income collapses, aggregate demand shrinks, but our orthodox central bank applies ordinary monetary policies, as if we were overheating the economy. The ECB's decision today to further increase interest rates by 0.75 percent pushes the Eurozone even further into recession, higher unemployment, inhibition of government budget relief to households and businesses, impoverishment of labor incomes."

But beyond the politics pawing at the vote-hunting ahead of the election date, what are the experts saying?

Former ECB official Lorenzo Bini Smaghi, in an interview with La Stampa, noted that Lagarde's ECB decision to raise euro area rates by as much as 75 points was "an almost inevitable decision," but issued a warning: "Watch out for downside risks."

The president of Société Générale explained, in fact, that "the latest inflation data, which were more persistent and higher than expected, and especially the weakening of the euro against the dollar, made the 75-point increase almost inevitable."

"The central bank's refinancing rate rose to 1.5 percent, which is still a level well below inflation, meaning that monetary conditions remain accommodative."

Bini Smaghi also said he was "not intimidated," reads the La Stampa article, "by a possible negative pinwheel around Italian debt after the election round at the end of the month.

The warning, however, was not missed: "We must not risk making the same mistakes as in the 2011 crisis, when the spread was at 575 basis points and people cried conspiracy."

Bini Smaghi remarked that "the experience of the last 20 years shows that problems do not arise from the color of governments but from the policies that are put in place, and from the capacity for dialogue with other partners and with European institutions. In the recent Italian election campaign, there has been a revival of the 2011 crisis, reintroducing the international conspiracy thesis. Those who follow this thesis show, or pretend, that they have not understood what happened then and risk making the same mistakes."

And in fact, even before the Financial Times article on the hedge funds' short bet against Italy, several in Italy had again cried conspiracy after the publication of the Goldman Sachs note: a note that had been circulated well before the government crisis that culminated in the resignation of Prime Minister Mario Draghi, when Italians were expected to return to the polls in the spring of 2023.

Anger had been expressed mainly by sovereignists and populists who had cried, of course, conspiracy.