At the trading on September 5 the euro has fallen below $0.99 for the first time in 20 years. The last time the euro was at this level was at the end of 2002. 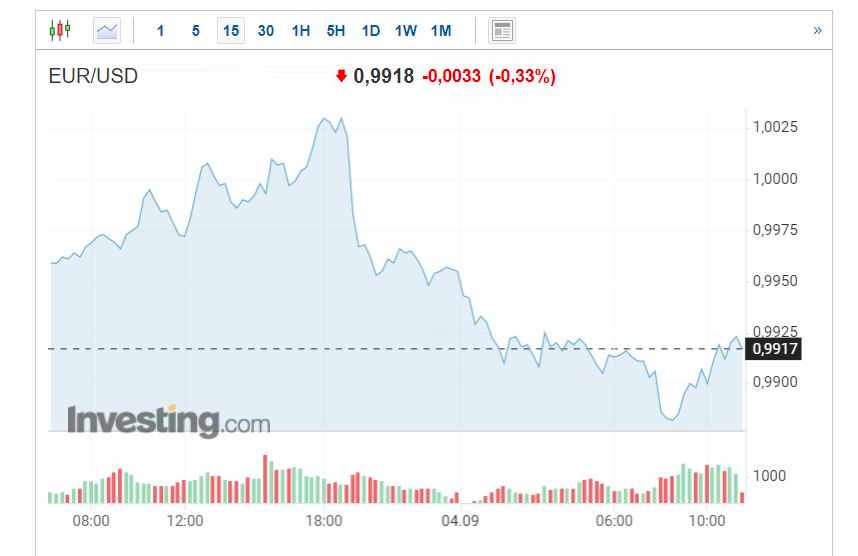 On September 2 the European Central Bank set the prime rate at $0.9993. The euro has gradually declined over the past year. In the course of trading on July 11 the dollar/euro exchange rate fell to $1.004 for the first time in 20 years.

Market experts attribute the decline of the European currency to the instability of natural gas supplies from Russia and the Ukrainian events.

The ECB has already raised lending rates and plans to do so again to curb inflation. The U.S. Federal Reserve began taking similar measures earlier, which led to a strengthening of the dollar.

Analysts believe that the fall of the Euro will continue if the energy crisis in Europe develops further. Experts from the Japanese bank Nomura International predict the fall of the euro to $0.95. U.S. Morgan Stanley expect rates around 0.97 this quarter.

The cooling of demand in the global economy is taking place under the sign of risk-off, as it is also combined with central banks applying the brake. The beneficiaries are the safe-haven currencies, the dollar and the Swiss franc. In both cases, rates have slipped below parity to the euro. Central banks there are also on the spearhead of the tightening (yes, in Switzerland too - the surprise interest rate hike is testament to that, and more will come). The U.S. and Switzerland are also countries that may not have energy problems in the current turbulent environment.

So far, we have been forecasting EURUSD lows (directional strengthening of the dollar) and this was the correct forecast. We are not entering a scenario of a sustained uptrend on the USD, but we are lowering our forecasts. The EURUSD rebound will also be weaker than we thought so far, and will coincide with the end of interest rate hikes in the US and the end of winter in Europe. The EURCHF exchange rate is on a similar trajectory.