The European Commission's proposal does not convince Germany, the Netherlands and Austria, who fear a drop in supply. 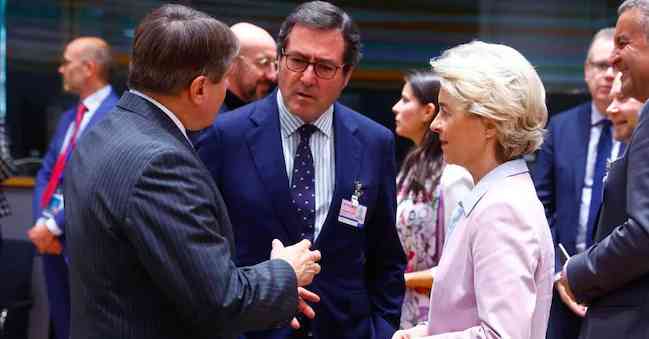 BRUSSELS - On the eve of the European summit, Commission President Ursula von der Leyen launched the idea of strengthening the firepower of REPowerEU, the energy conversion plan. At a time when the reasons for focusing on more common debt are multiplying. At the same time, the conflict among the Twenty-Seven on how to counteract the jump in gas prices continues. The Netherlands, Austria and Germany still appear doubtful about intervening in the market.

"The real solution to preserve our competitiveness is to invest (…) in renewables. In Europe, however, only countries with a budgetary margin can make these investments,' said Ms von der Leyen. 'This would inevitably lead to a competitive imbalance in our single market. That is why we need REPowerEU. It is not enough: we must also accelerate it, strengthen it and make it more effective'.

An EU official explains: 'The NextGenerationEU and the national recovery and resilience plans are very much focused on the needs of countries. The Union's energy future requires interconnections between Member States and cross-border infrastructure. There is therefore a need for fresh money. Initially, we can use the unused loans from NextGenerationEU. If they are not enough, as is likely, we will have to think about new forms of joint financing.

Unused loans currently amount to some EUR 225 billion (although Madrid has already warned that it intends to apply for its share of EUR 84 billion under the Recovery Fund). President von der Leyen's stance comes after Commissioners Thierry Breton and Paolo Gentiloni proposed new joint financing programmes to help member states.

After an initial cold reaction, Germany is now debating the possibility of new joint debt (the Netherlands, on the other hand, still spoke out coldly yesterday). On the other hand, fears are growing that the crisis could undermine European competitiveness. Deutsche Bank writes in a recent report: 'When we look back at the current energy crisis in a decade or so, we may see this period as the starting point of an acceleration of deindustrialisation in Germany'.

Between today and tomorrow the heads of state and government will discuss the energy plan proposed by the Commission on Tuesday. At the diplomatic level, the final conclusions of the summit continued to be negotiated yesterday. At the centre of the debate will be the EU proposal for a gas price correction mechanism on the market. "It has raised many questions among the Twenty-Seven," noted a Council official yesterday. That said, the summit's latest draft conclusions give a mandate to Brussels to move 'urgently' towards concrete proposals in this direction.

The most doubtful remain Germany, the Netherlands and Austria. They fear an impact on supply. Just yesterday Paris and Berlin announced that they had postponed a meeting between the two governments that was to take place next week until January. French diplomats criticised German positions on the energy front or the choice, also German, to buy American and not European weapons. The parties explained that they needed more time to find agreements on various fronts.

At the summit today and tomorrow, Prime Minister Mario Draghi explained yesterday that he will insist on the proposal of 15 countries, including Italy, for a dynamic gas price corridor. Rome will also want to note the need to preserve economic competitiveness and the single market, riding on the urgency of new debt in common. On the other hand, the reasons for jointly providing an exit from the crisis will multiply: besides the economic shock and energy reconversion, there will also be aid to Ukraine to be financed.