On 19 December 2022, social network users chose in a poll that Musk should step down as head of Twitter. 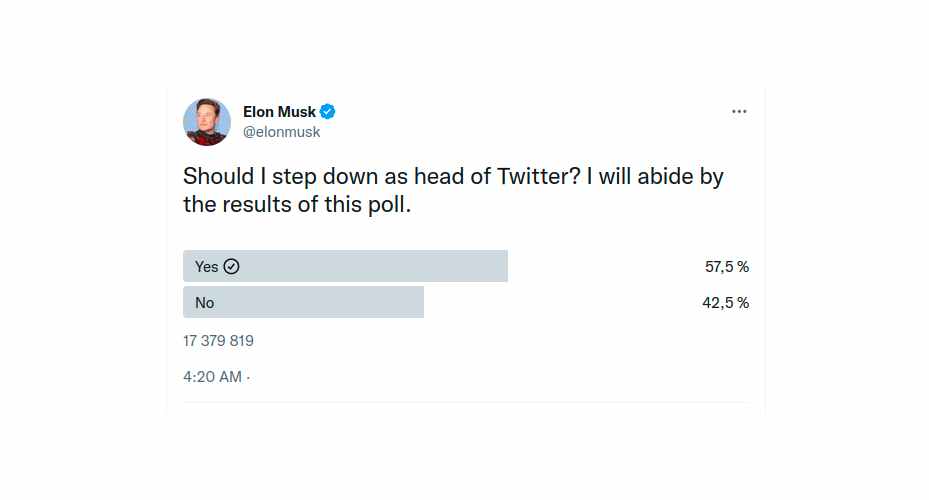 On the night of 18 to 19 December, Elon Musk launched a poll among all registered users of the social network about whether he should step down as head of Twitter.

"Should I step down as head of Twitter? I will stick with the results of this poll," Musk wrote in the poll.

During the survey, Tesla shares rose 5% as users voted against Musk.

Experts believe Musk decided to take such a poll after some blunders in his decisions, including the recent blocking of social media accounts of journalists he believed were spying on him. According to their version, Musk may be close to stepping down as CEO of Twitter, but it is not a given that he will decide to leave now until he has introduced and inducted a successor worthy in his opinion.

Musk wrote after launching a poll about the possibility of his departure, "as the saying goes, fear your wishes, they may come true".

Before the poll, Musk apologised for the flaws in the platform and explained that there would be future votes for major changes to Twitter's rules.

On 28 October 2022 Elon Musk officially bought the social network Twitter for $44 billion. The co-founder of PayPal, owner of Tesla and SpaceX did so six months after his initial offer to buy the platform. As the first action Musk took as head of the new company, he tweeted "the bird is freed" and fired the entire management team of the platform.

In early December, Twitter revealed Twitter 2.0 principles as part of an ongoing commitment to public dialogue. Twitter 2.0's mission will not change and will continue to be to promote and defend public discourse, to be the town square of the internet.

On 17 December, Musk, via journalists, published the sixth part of Twitter's hidden files about management's constant contact with US intelligence agencies and the FBI's excessive influence on the platform.